The living history of ruins of Hampi in Karnataka makes any visitor visualise the place that would have existed centuries ago. The town has many small and big shrines and many of them ceased to be worship places. One such is the huge Narasimha statue situated close to the Badavilinga temple.

The statue often referred to as Ugra Narasimha, the ferocious form of the god with lion's face and a human body should have been Lakshmi Narasimha. Going by the marks of removal of a portion on the chest of the statue and the arm with fingers at the backside of the statue hint the presence of Goddess Lakshmi on the statue. 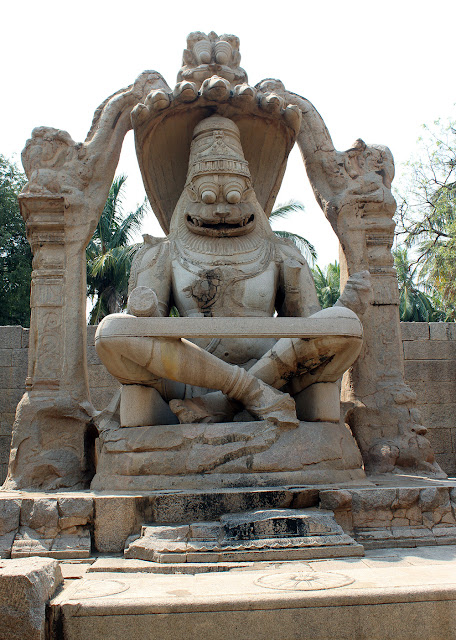 The teeth, the right hand and the feet in the front of the statue are mutilated. The largest of the monolithic statue in the Hemakunta group of temples, the statue is meticulously sculpted. Open to the sky, the statue is a grandeur among this group.The proportion of the chest to the head and the legs is so perfect that it is difficult to take off the eyes quickly. The cross-legged statue is seated on the coil of Adisesha, the holy snake on which Lord Vishnu reclines in many shrines. The seven heads of the snake forming a hood adorn the statue as its headgear.

Being one of the interesting gigantic statues among the ruins, your guide or your taxi driver will not give this a miss. Even if you are on your own, the direction boards to the Royal Centre mentions this 'temple' closer to Sri Krishna Temple which is inside a closed enclave.

This statue deserves an exclusive post and my visit to other parts of the town are in a separate post. Do read my experience.

Email ThisBlogThis!Share to TwitterShare to FacebookShare to Pinterest
Labels: Karnataka 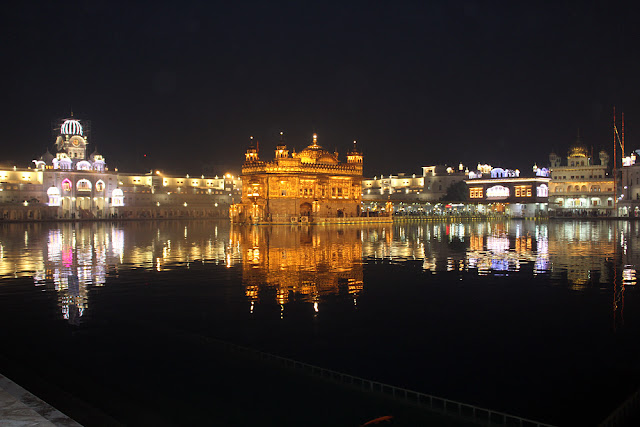 I couldn't resist posting this picture before writing a detailed blog post.

Sri Harimandir Sahib or the Golden Temple at Amritsar is a sacred place of the Sikhs. The scenic beauty of the temple situated in the middle of the small lake Amrit Sarovar is to be experienced both during the day and at night!

Email ThisBlogThis!Share to TwitterShare to FacebookShare to Pinterest
Labels: Punjab

I would prefer to call it a sculpture garden rather than a mere 'rock' garden. It is unbelievable to know that this wonderful space created by the lakeside by a government employee Nek Chand was illegal and was kept a secret for a good 18 years! His creative usage of construction wastes collected from across Chandigarh is now a public space.

The other popular space Rose Garden has a season to visit. Unless it is spring or a little after the rains, the Rose Garden is a large space nothing more than a park in any other city. But the Rock Garden has no season to visit. It is beautiful throughout the year. Every pathway secretly leading to another gorgeous space of arts is to be experienced. You need to take a slow walk. Or visit the garden in parts for two or three days.

This is an artificially created waterfalls and the space around it is created with bits and pieces of many stones and small rocks. 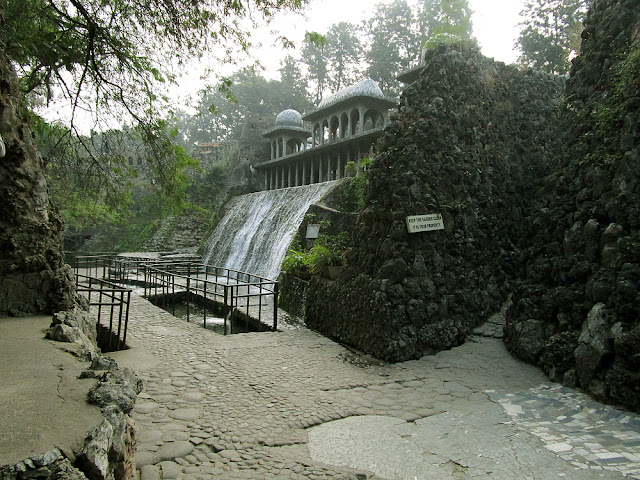 Located closer to the Sukhna Lake, Chandigarh's Rock Garden is open from 9 am to 7.30 p.m. daily and there is an entry ticket to visit the garden. In winter the garden closes at 6.30 p.m. 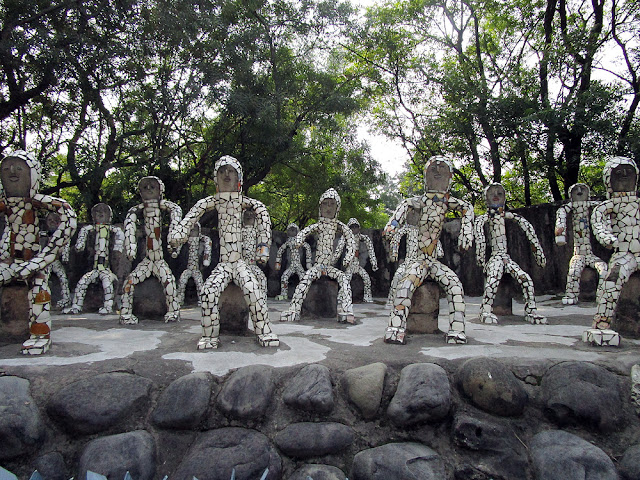 All these are made of broken mosaic flooring and other tiles from the construction debris. How many days of passionate work could it have taken! 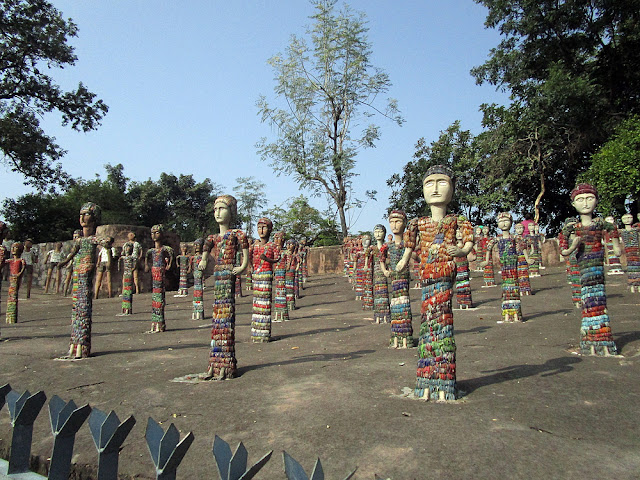 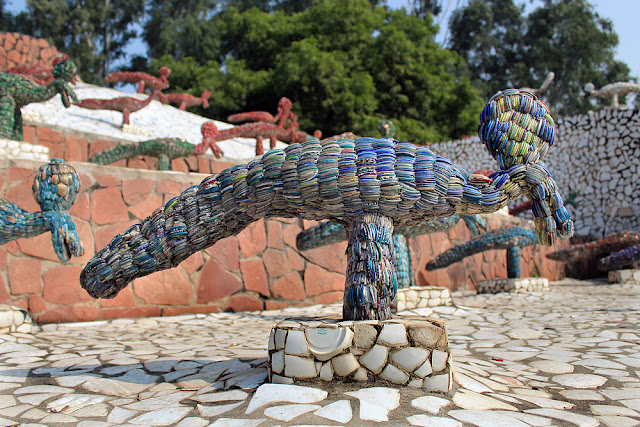 Are these pieces of glass bangles? Yes, they are. Carefully put together in such a symmetric pattern that all these peacocks look like being from the same family!

It is best to visit this place right at the time of opening in the morning. Else you would be caught between the selfie groups as every bit of the garden is worth a picture to be in!
Posted by Revathi R at 6:53 PM No comments:

The Doll Street of Mylapore in Chennai

A small but prominent neighbourhood in Chennai wears different colours during different occasions. Every month from January to December is a celebration or the other in this part of the city. If it is not a temple event, it is a scene of seasonal vegetables or marketplace of knick-knacks.

In September-October, it is the season of Navaratri and an entire stretch along the side of the temple tank here turns into a Doll Street. Navaratri or Dussehra is celebrated in different forms across India and in Tamil Nadu, setting up of dolls and images of Gods and natural elements is customary in many homes during this time.

The preparations for the festival begin weeks in advance. The artisans from nearby villages make a beeline to the city bringing along the dolls colourfully painted up. The spots along the street are unofficially reserved by these artisans and they make these spots their home for a month.

Though there are a couple of such spots - West Mambalam, Triplicane, Kosapet - Mylapore becomes a bigger hub with more number of stalls set up across the northern side of the Kapalesswarar temple tank.

A walk down the stretch is worth an evening and never forget to carry your best camera lenses. If you start a conversation with the sellers, you would get to hear a few mythological stories too! 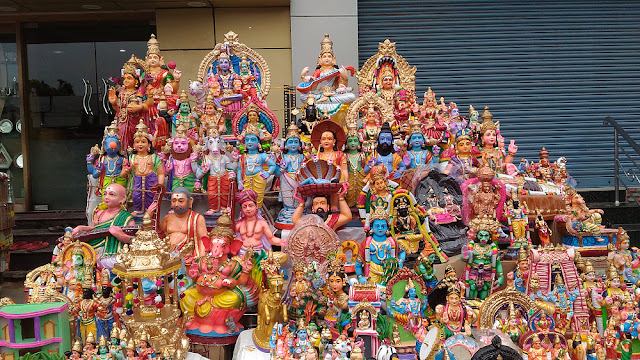 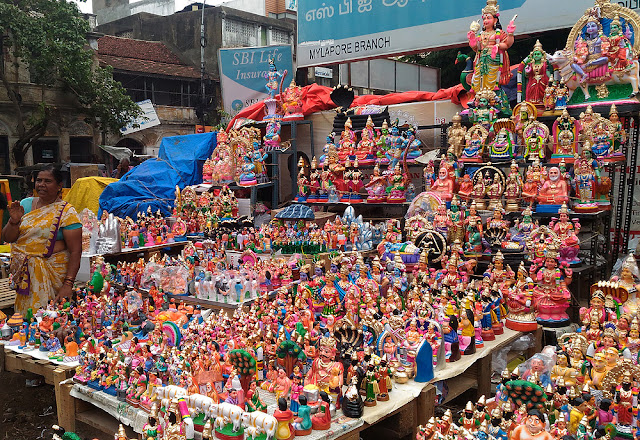 Some dolls come in sets. They may be a set of 8 Lakshmi dolls or 6 Karthikeya dolls or a set of many dolls that depict a story. 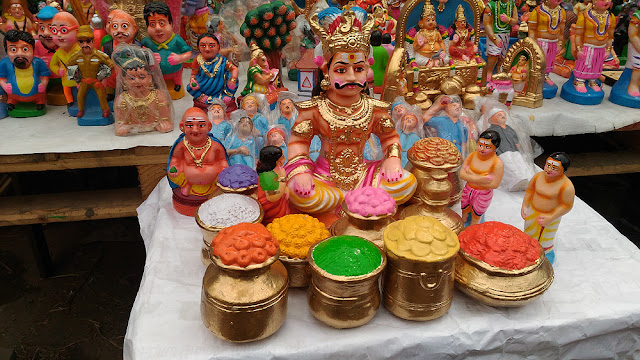 A set of dolls - Bakasura, a demon who demanded a lot of food from the king as depicted in the epic, Mahabharata. 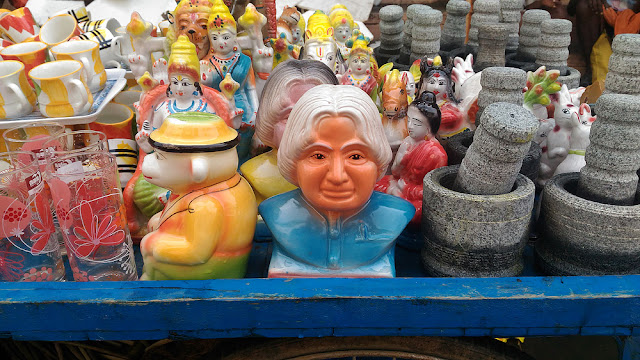 Sometimes the dolls are very topical too. This year, there is this image of India's former President Dr. A P J Abdul Kalam, who was also an inspiring scientist. 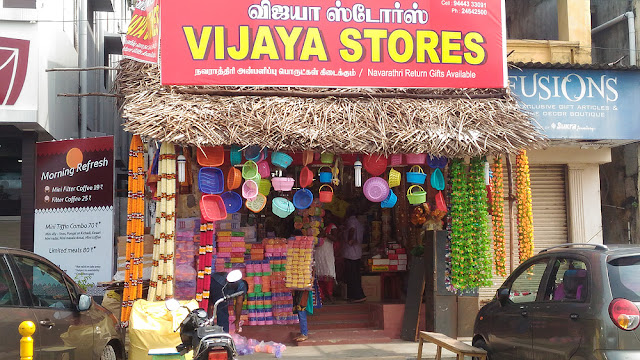 When you walk down further along the street, there are shops that sell return gifts for the visitors to your home during Navaratri. These stores also have items for decorating the kolu, the display of dolls in steps. 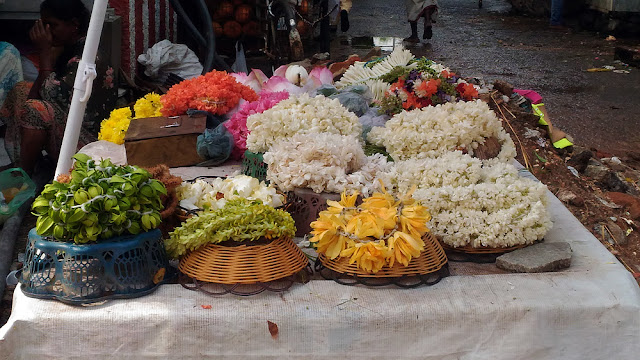 Different types of fragrant flowers strung in different patterns could be seen on the same street. 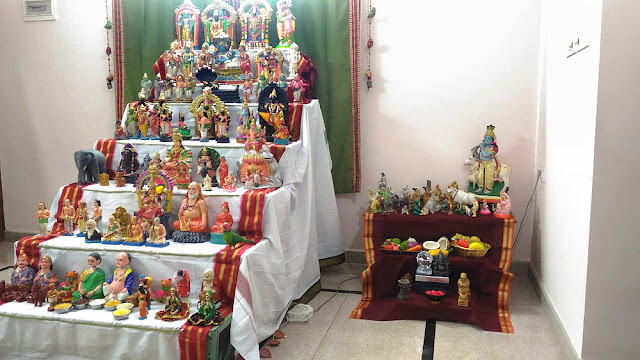 This is how the kolu in our home looks like. There are elaborate ones in other homes and this is might be one of the simpler kolus! 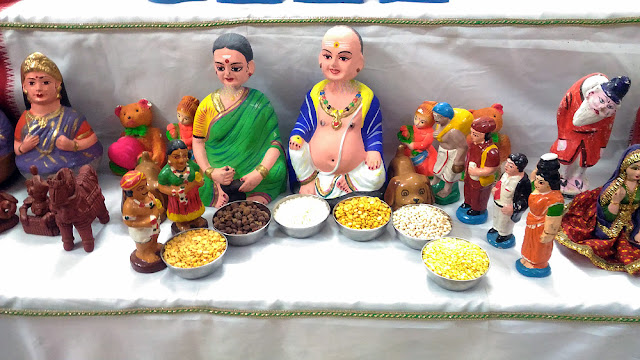 The shopkeeper couple that sells pulses is a must to be kept in kolus.

If if you are in Chennai now, Mylapore is the place to visit.
Posted by Revathi R at 12:33 PM No comments:

Living in Bangalore, many think people here go on regular walks and jogs in the well-maintained parks. But no, not me. Still, Lalbagh fascinates me. The flora and fauna here are so wonderful that I promise myself that I would resume my walking schedule every time I go there.

This is the canopy that welcomes the joggers at the West gate of Lalbagh. I miss to take a picture of it all the time, but not this time.

If you walk down your backyard there are many beautiful places you would want to visit again and again and this is one such! 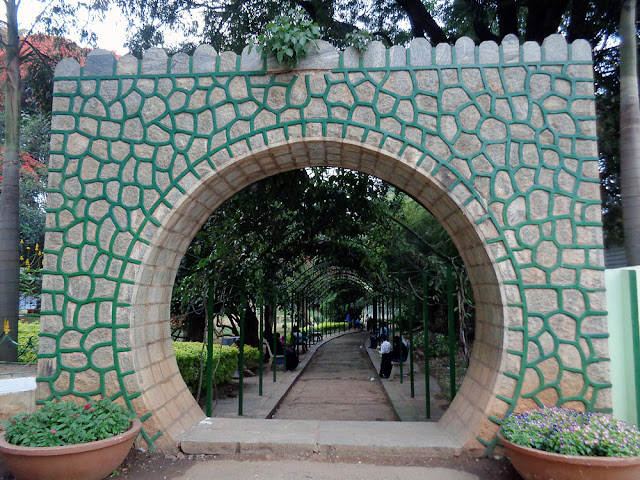 Email ThisBlogThis!Share to TwitterShare to FacebookShare to Pinterest
Labels: Karnataka

Andaman Islands from the sky

Not a planned trip. Yet we packed and moved quickly. It is a wonderful feeling to cross the seas and arrive at another part of India. The Andaman islands float in the Bay of Bengal and the view from the plane is awesome! 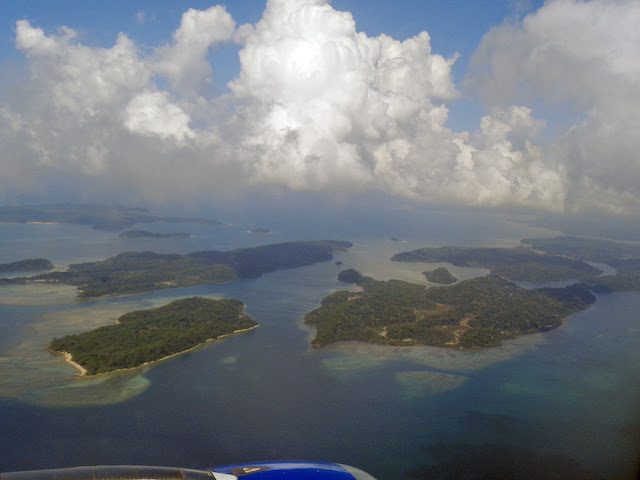 Email ThisBlogThis!Share to TwitterShare to FacebookShare to Pinterest
Labels: Andaman and Nicobar Islands

Pray at Sree Krishna temple and relax with nature in Guruvayur

Whoever mentioned Kerala as God's Own Country, the person should have really experienced the beauty of nature as well as the small and big temples in the region. Among the popular temples in Kerala, Guruvayur is known as 'Dwaraka of South India.'

The idol of little Krishna here is said to be more than 5000 years old. The history documents that the Dutch raided the temple is 1716 and Hyder Ali captured Calicut and Guruvayur in 1765. Later in 1789, Tippu SultaninvadedSultan invaded and the idol at the temple was hidden underground. When Tippu Sultan lost to the English in 1792, the idols were reinstalled at the temple. But the daily puja at the temple was back only in 1825.

The temple restricts entry only to Hindus and men are not allowed to wear shirt or vests. Women should dress traditionally in saris or salwar.

The idol of Krishna is decorated in various attires many times during the day. If you visit the temple at night, the lighting in the circumambulatory passage in oil lamps lit in rows will make you keep going around the temple for a few times!

The temple pond known as Rudratheertham is located on the northern side of the temple. People take bath here before entering the temple. Sitting on the steps and enjoying the tank filled with water is very relaxing.

The shops in the East Nada sell mementoes, trinkets, traditional Kerala clothing, wall hangings ... You can walk down the entire town. The temple administration runs a couple of guest houses - Kousthubham, Panchajanyam, Sreevalsam, Sreevalsam Annexe and Sreevalsam Extension - all on the southern side and they are very close to the temple.

Statues of Maraprabhu and Kesavan
If you walk by these guest houses don't miss the 54 feet terracotta statue of Maraprabhu located at the Sreevalsam Guest House Complex. Created by sculptor P.V. Ramachandran of Shilpayagam Creations, Aluva, this statue is a creative expression of Lord Krishna as mentioned by the scholar, poet Poonthanam. People believe that this Maraprabhu statue generates healthy energy because of the medicinal herbs used in it. Closer to this is the statue of Guruvayur Kesavan, the now deceased majestic elephant which served in the pujas of the temple.

Temples nearby
There are many other temples in the vicinity, most of them are within walkable distance. Parthasarathy temple, Venkatachalapathy temple, Mammiyur Mahadeva temple are among them. Harikanyaka Temple, Ariyannur is at a 5 km distance from Sree Krishna temple.

If you have children and young people with you, you could visit interesting places in the town.

Punnathur kotta or Ana Kotta
The ruins of Punnathur is now a sprawling open space where elephants are taken care of. The Guruvayur Devaswom (temple administration) maintains this space. The elephant camp is 3 km from the western gate of the temple. 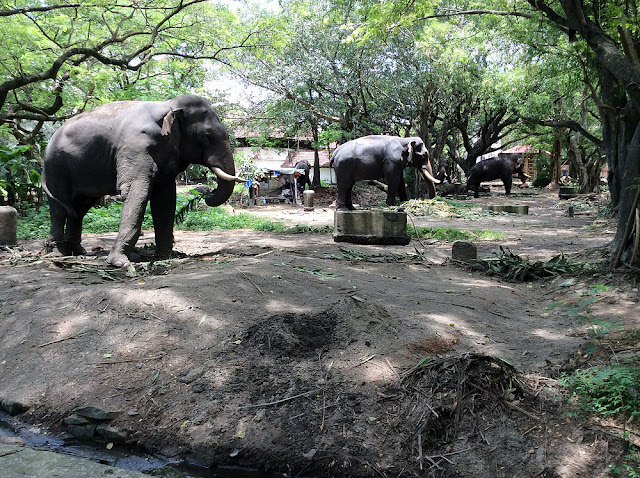 Institute of Mural Painting
The institute that offers a diploma course in Mural Painting exclusive to Kerala. Visit this place if you love arts. You could take home some beautiful artwork. This is located on the Eastern side very close to the temple. 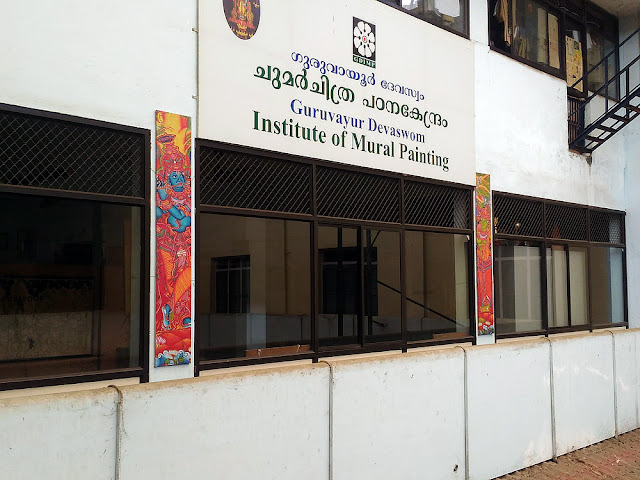 Chavakkad beach
The beach is situated 5 Km from Guruvayoor Sree Krishna Temple. It is still an unexplored beach and hence it is very clean. The colourful boats on the shore are so eye-catching that many take selfies with these boats in the background.


Accommodation
Apart from the Temple guest houses, the town has a lot of hotels, big and small.
We stayed in Hotel Mayura Residency located in the West Nada. 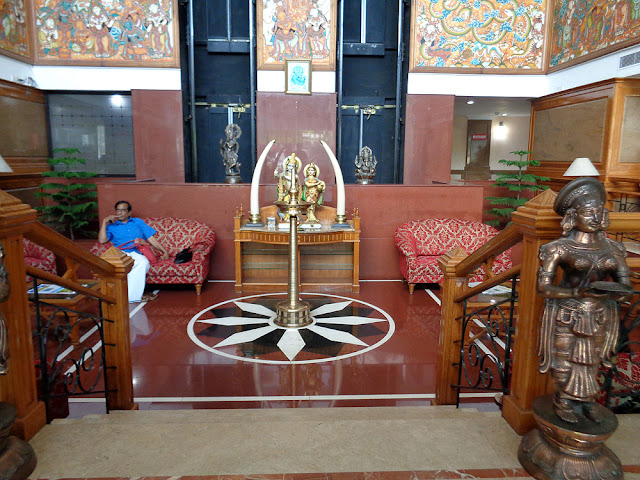 This is one of many 3 star hotels in Guruvayur. The interiors at the lobby have appealing mural paintings. The rooms are good too. However, hot water for bathing could be an issue sometimes. Also, we felt that a little more attention to the maintenance of the toilet would make the stay more comfortable.